The bathroom sink plays an important role in our hygiene. Most often, it is where one washes his or her face in the morning or after getting back from outside. It is also where we brush our teeth.

Naturally, it will be quite inconvenient if the bathroom sinks get clogged. You may end up with a funny smelling bathroom, or worse, molds and bacteria can grow in the clogged sink and spread all over the bathroom!

Experts recommend dealing with sink problems as soon as possible. It will then be beneficial for anyone to know how to unclog bathroom sinks.

Arguably, anyone can handle a sink that’s been clogged. It is fairly easy to do as long as one knows the process for the different ways of doing it. There is no need to call a plumber.

One, however, has to keep in mind that extra care must be taken when fixing a clogged sink. This is because the plumbing can be damaged while unclogging it.

It is also highly advisable to wear protective gear when dealing with a clogged sink. These would include masks and gloves. One needs to wear the gloves to prevent mold and bacteria–if there are any–from touching the hands. The mask also helps in preventing the inhalation of the cleaning agents.

Here are the different ways of unclogging the bathroom sink… If you notice a clog or some slowness in the draining of water in the sink, then you can pour some boiling water on it. After all, boiling water can dissolve any organic matter inside the drain. Just keep in mind that the water should be boiling and not just warm water.

However, boiling water is not recommended for those with PVC pipes in their sinks. This could cause the joints of the pipes to loosen. Also, boiling water should not be used on porcelain sink bowl since it will crack.

How To Unclog Bathroom Sink With Natural Solvents

There are many drain cleaner products on the market. Unfortunately, many of them are quite corrosive and can even trigger a chemical allergic reaction.

Some even end up suffering from respiratory problems when using these products excessively. This is why many people turn to natural solvents rather than buy harsh over-the-counter products for unclogging the sink.

The natural solvents you can use to unclog the sink are easily found at home. These would include baking soda, lemon, and vinegar. One would also need some rags and boiling water. Step 2: Pour all the baking soda into the sink’s drain ensuring that the soda falls inside the drain followed by the white vinegar. Do not be alarmed if there are bubbles or some fizzing sounds after pouring the vinegar. The sounds and bubbles are due to the chemical reaction of the vinegar and baking soda mixture.

Step 3: Now grab the rag and plug the drain with it. One can also use the sink stopper to do this. Plugging the sink’s drain will contain the chemical reaction on the clog. Do this and wait for 15 minutes, so that the mixture can do its work. One can boil the water while the drain is plugged.

Step 4: After 15 minutes, squeeze some lemon juice into the drain. This is needed to remove the foul smell coming from the pipes due to the blockage. In many cases, bathroom drains get clogged because of the accumulated hair strands and dead skin, which smell bad over time.

Step 5: After squeezing the lemon, pour the boiling water on to drain. Doing so will push down the vinegar, baking soda as well as the blockage. 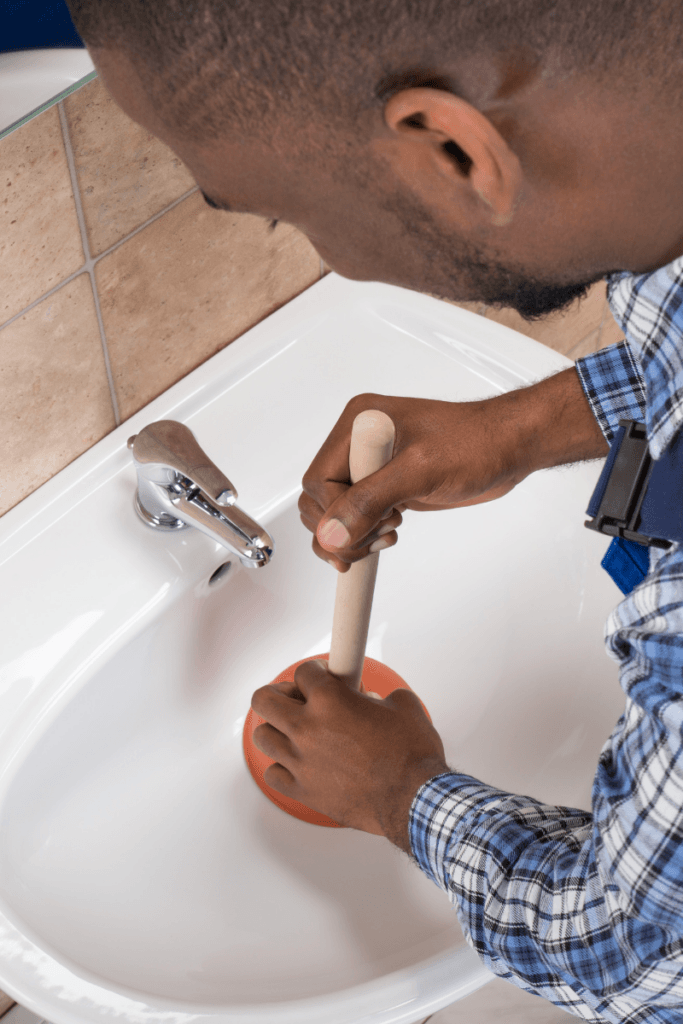 Plumbers will recommend using the plunger when asked how to unclog bathroom sinks. Plungers, after all, are easy to use and readily available in supermarkets.

The plunger and a flashlight are all one needs when going with this option.

Step 2: Turn on the faucet as there should be some water to cover the drain. Now start creating the suction seal by placing the plunging directly on top of the drain. Press the plunger down until you can feel its bottom tighten. If this is difficult to do, then consider grabbing a chair to stand on, so you are positioned well to hold on to the plunger comfortably. Be careful not to hit the faucet while you do the plunging.

Step 3: Now plunge aggressively up and down for about 15 to 20 times. The plunger should be sealed tightly on to the drain to create a suction. Otherwise, the blockage won’t be forced out from the drain.

Step 4: Remove the plunger and see if the blockage is visible. Grab the flashlight to check for it. If it is within your reach, then pull it out immediately. If you cannot see the blockage, then repeat the process of plunging until it comes out.

Read also: How to Install a Bathroom Sink?: A Basic Guide

No Need to Call a Plumber Sinks including the bathroom sink would clog now and then. This is because of the accumulated matter in the drain. Do not fret if you notice that your bathroom sink is already clogged.

There is no need to call the plumber immediately as well. You have the choice of either using boiling water, natural solvent or the plunger to get the blockage out the soonest possible time. Make sure you use a mask as well as gloves to protect yourself while doing this task. 3 thoughts on “How to Unclog Bathroom Sinks: Three Simple Ways”